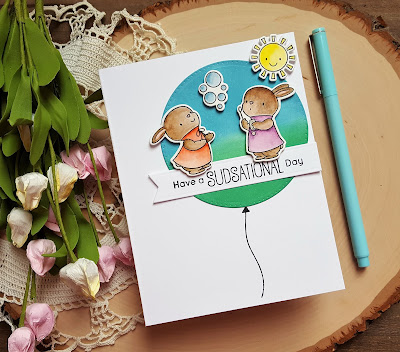 Hello!  I'm stopping in with a couple of cards that feature bunnies and carrots!  First up is the card featuring the bunnies.   For the last few years we had tons of bunnies in the neighborhood, but as spring approaches there have been no bunnies.  I'm so sad.  Unfortunately I think they have fallen victim to the cayotes and eagles.   With the lack of real bunnies I decided to color up some super cute MFT bunnies and use a couple on a card for this week's MFT sketch challenge, as well as the Simon Says Stamp Wednesday challenge to create a scene.  I stamped the bunnies on Bristol cardstock with VersaFine ink and then colored with distress markers.   Once they were all dry I die cut them with the matching dies.  I built my little scene by die cutting a circle using an AJVD polka dot backdrop die and then blending on Lucky Clover and Broken China distress oxide inks.  I stamped the sentiment on white cardstock and die cut with a MFT fishtail flag stax die.  I stamped a balloon string on my card base and then adhered my "balloon" and all the little pieces of my scene and the sentiment strip.  Love how it turned out. 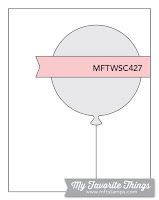 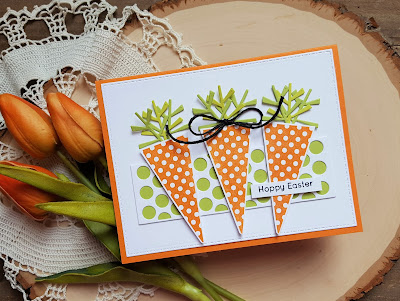 The second card features the carrots and is for Freshly Made Sketches and the Reverse Confetti Stock Your Stash challenge to make an Easter or spring themed card.  When Reverse Confetti released the fun Triangle Trees stamp set Jen, the owner of RC, made a super cute card using one of the tree images as carrots.  My card is a bit of a case of that card.  To make the tops of the carrots I used the stick part of the tree from the RC Branch Out Confetti Cuts set.  I simply trimmed off the bottom part of the tree.  I used two different colors of green cardstock, but they are super close in color.  I stamped the polka dot tree and then trimmed them out because I currently don't have the triangle die.  I think when I bought the set the die was sold out.   I then adhered the tops to the carrots.   For the long strip element in the sketch I used the Polka Panel Confetti Cut that I cut down further using the die a second time.   What I did is pretty easy, but a little complicated to explain.  I then backed that with some of the green cardstock I used to die cut the carrot tops.  I adhered everything to a die cut piece of white cardstock and then added the little sentiment and the twine bow to the center carrot. 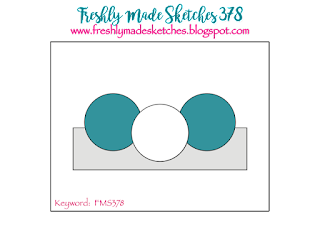 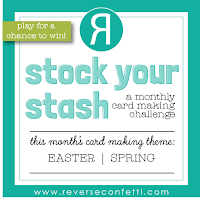 Hope you have a wonderful day!

Love how those trees became carrots! Adorable cards.....glad you shared one at FMS

What a cute pair of bunnies, this is so sweet Rosemary! And how FUN are those polka dot carrots, love them!!

Delightful and cute little bunnies. So glad to have found you through the SSS challenge.

What a great set of cards! I just love those carrots! What a great way to use the trees! So perfect for Easter! Thanks for joining us this week at Freshly Made Sketches!

What a great take on the sketch, Rosemary! I love the fresh colors and geometric lines! Thank for playing along with FMS this week.

The bunny scene is adorable, Rosemary--love the background & your coloring is wonderful! The carrots make me smile--so clever & cute!

Love your sweet bunny scene, Rosemary, perfect for our challenge this week! Thank you for joining us at the Simon Says Stamp Wednesday challenge!

What super cute bunnies, Rosemary ... and delicious colouring ... such a sweet little scene! Those carrots are so much fun ... the leafy tops are just brilliant ... I want to touch! Hugs, Anita :)

OMG! Those triangle tree carrots just stole the show for me! You are so clever! I love them!