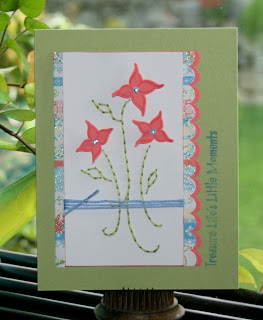 I decided to give Jenny's current In Stitches challenge being sponsored by DeNami Designs, one of my favorite stamp companies, a go!  I used a recently purchased DeNami stamp, Large Flower Spray, for my card along with some SU! cardstock I had out to make another card.  I also used some patterned paper from the DCWV mat stack Garden Whimsy.  The colors are pretty fun and bright.  I stamped the image using SU!'s Certain Celery image on white cardstock and then the flower portion on Cameo Coral cardstock with Cameo Coral ink.   I pierced the stems and leaves of the first image and then stitched them using a light green DMC floss.  The Cameo Coral flowers were cut out and popped up on the card.  Did some matting using the patterned paper and additional cardstock.

Thanks for taking a peek and have a great day!

Labels: Close to My Heart, DCWV, DeNami, PTI, Stampin Up

This IS fun! Somewhere between glitter & bling, stitching and exquisite paper-piecing.... flawless use of color and terrific sentiment... I thought I woke up in CARD-CRAFTER'S heaven... THIS IS GORGEOUS, ROSE! Clearly, you got your craft ON! Way to go, girly!

Oh my gosh!
I
heart
this! every bit of it!

love your stitching on this fabulous card...really lovely!
blessings,
nancy

What a fab card, Rosie! Love the actual stitching on the stems...

Your stitching really makes this card - love it!

This is gorgeous Rosemary!Yummy colours and I love the double scallop edging. As for the stitching, wow I love it!!