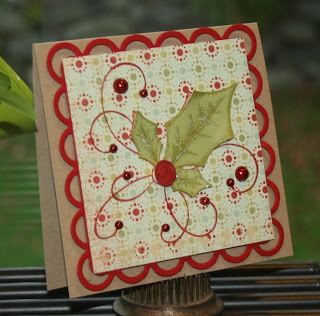 The Elegant Holly Swirls set has two holly images.  For my card I used the larger of the two.  The image was stamped using Riding Hood Red Ink on My Minds Eye Snowed In patterned paper.  Holly leaves from the Holly Leaves set were stamped on patterned paper (Snowed In) and die cut using the holly dies.  These were popped up over the main image.  The image was finished with a trimmed out berry, some Stickles and pearls that I colored with a red Copic marker (Cardinal Red) to match the red ink.  The image was matted with red cardstock die cut using the largest Spellbinders Lacey Square die.

Thanks for taking a peek... i hope you check out the Heartfelt Creations blog.  My fellow design team members are an incredibly talented group.   I also wanted to let you know that Heartfelt Creations will be releasing some fantastic new sets and the most gorgeous new die on "Black Friday".  To celebrate they will be having some amazing deals for customers!
Posted by Rosemary at 5:00 AM

Rosie, what a beautiful card! I love those pretty swirls coming from the holly and the fun patterned paper you've used! :)

I love these stamps! Gorgeous card!!!!

Gorgeous, gorgeous card, Rosemary! The holly is beautiful and I love the way you've paired the swirls with it! Gorgeous pp too!

Rosemary, this turned out great! Such a pretty card!
hugs,
Gini

You AMAZE me, sincerely! I adore the fact that you can make a drop-dead FABULOUS card, without a sentiment and it SAYS everything! This is WONDERFUL! 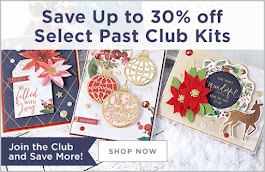