Hey there!!  Wow.. the weekend is over!  Where does the time go??  Have a couple of cards to share.  One card is for the current Timeless Tuesday challenge (that closes really soon!!) and the current Craft's Meow sketch challenge.  The second card is for the Flourishes release week challenge.  I'm working this week and so this will be the only Flourishes release week challenge I will be able to do {insert sad face}. 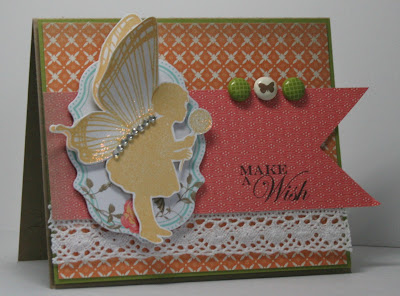 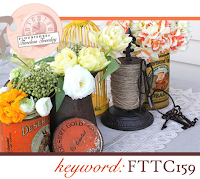 The Timeless Tuesday challenge host this time is Heather and she provide a beautiful inspiration photo and asked us to make a card using at least three of the colors from the photo.    I think I some how managed to use almost all the colors to be found in the inspiration photo!!  The stamps I used are from the Craft's Meow set Butterfly Kisses.  I stamped the little fairy girl twice using So Saffron ink.  One was trimmed out completely and the second only her wings.  I then applied a thin layer of Diamond Stickles to the second wing.  After it was dry I attached it to the main image and added the rhinestones.  Because I wanted the piece with the sentiment stamped on it to extend beyond the edge like it does in the sketch I trimmed 1/2 inch off one side of the card base, making it 4.25 x 5.  The sentiment strip is 5.5 inch, thus making the entire card 4.25 x 5.5.  All the papers are from Stampin Up!, including the little oval that the fairy girl is layered on. 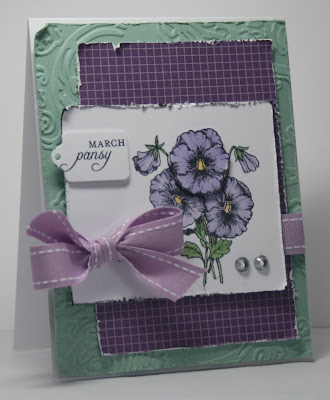 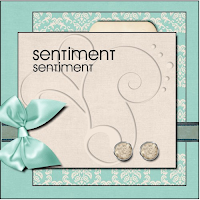 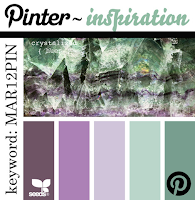 The second card uses the Flourishes set A Year of Flowers 1.  Since this is a color challenge I tried to adhere as closely to the colors as I could.  I was pretty happy to find a piece of SU! Sage Shadow cardstock because it is so similar to one of the greens used in the color swatch.   I colored the pansies with Copic markers.  Center pansy was stamped a second time, colored with Copics, trimmed out and then popped on the image.  The layout for the card is from this week's Sketchbook Saturday sketch.

Thanks for stopping by....

Hi Rosemary, Hope you are doing well :) both cards are beautiful. I am amazed at how close you have matched the colours on the pansy card for the colour challenge. gorgeous designs! :)

super duper gorgeous cards...I love how you stamped that sweet butterfly girl...love the bling and the sparkle...yellow, oh-how-I-adore yellow!!!!

Your pansy card is gorgeous!!!! Fab job on combining challenges!!!!!!

thanks so much for playing with us at The Craft's Meow!!!!!

Both cards are gorgeous Rosie, I love your little fairy in the Saffron colour it does blend well with the Bg.
Your second card has a lovely softness to it, the hues of Purple are just so elegant and placing the Sage Green as you embossed Bg brings it all to life beautifully.
Smiles:)

Hi Rosemary,
What lovely cards, I especially like the pansy card, such soft colors - great background textured paper and I like your treatment for the edges of the various layers.
Thanks for sharing,
Barb in Texas

Wow! Both cards are just beautiful! Love the sparkly wings on your fairy, and beautiful coloring on the flowers! Thanks so much for playing along with Flourishes! :-)

Both are super!
Christine

LOVE the pinterest inspiration card :) You shabbied it up beautifully. Great use of layout too! Thanks for playing along with us this month!

I love how you distress your papers Rosi. I just adore how you layered that cute little fairy with her wings.

2 great cards--I especially love the pansy card. You got the colors just right based on the swatches--gorgeous!

Both cards are great. I like the distressing on your second card. Thanks for playing in flourishes challenge.

This is a very pretty card. Your coloring is perfect for this challenge. I love all the distressing. Thanks for joining us at Flourishes this month.

Too much beauty!!!! Love the added dimension on the fairy wings and your grand bow on the second card!

JUICY, juicy AND juciest! WOW, girl! You are as TALENTED and prolific as EVER! Bravo!

Both are SOOOO gorgeous, Rosie!!! 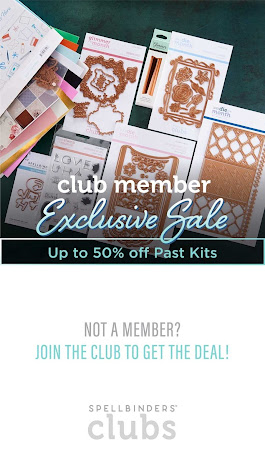