Hello!!  I'm back with a card that I made using the current Sketchbook Saturday sketch and the color combo from ColourQ.  I'm also going to pop this into the current AAA Card challenge watercolor.  I hope my splatters of color are sufficient for the challenge. 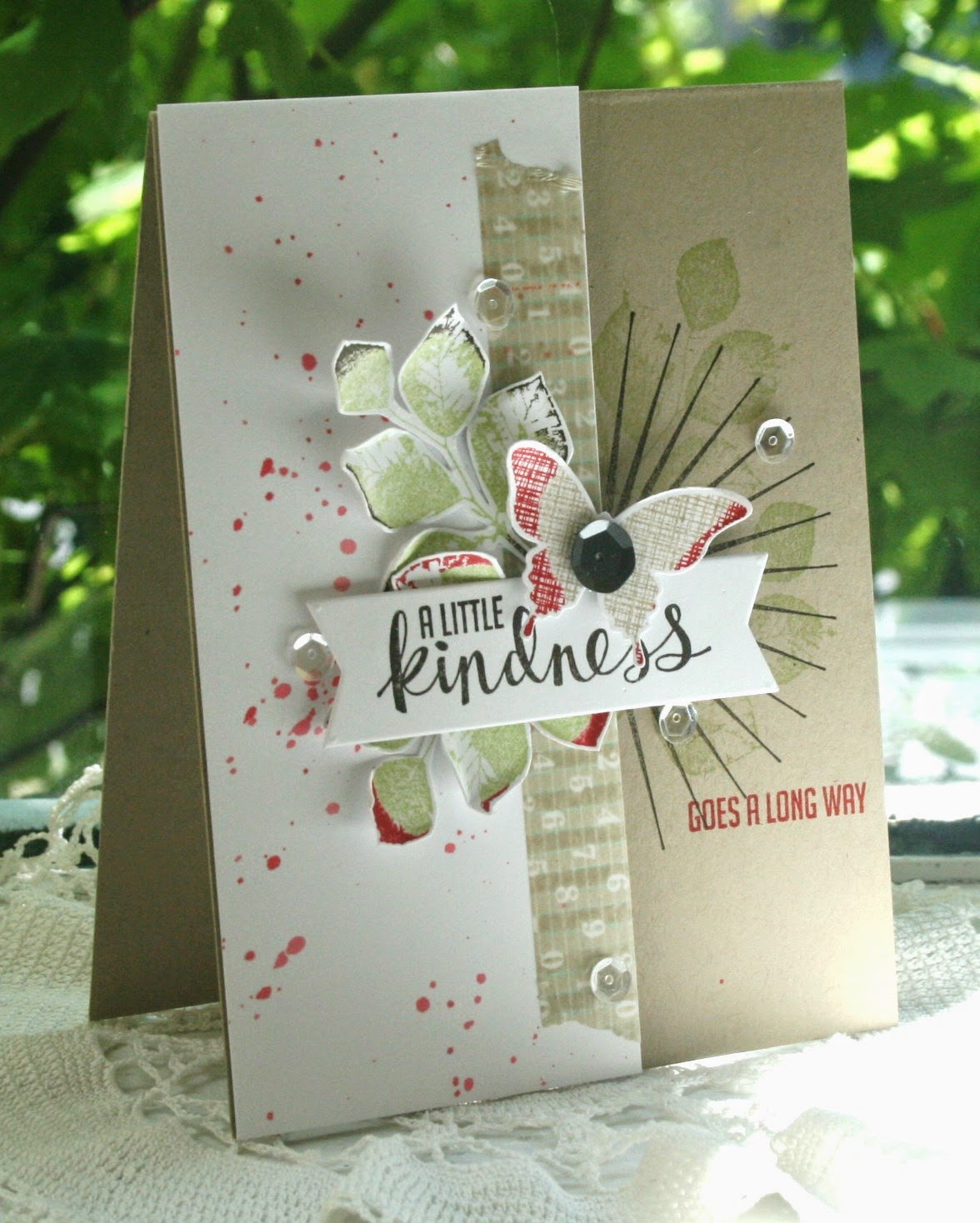 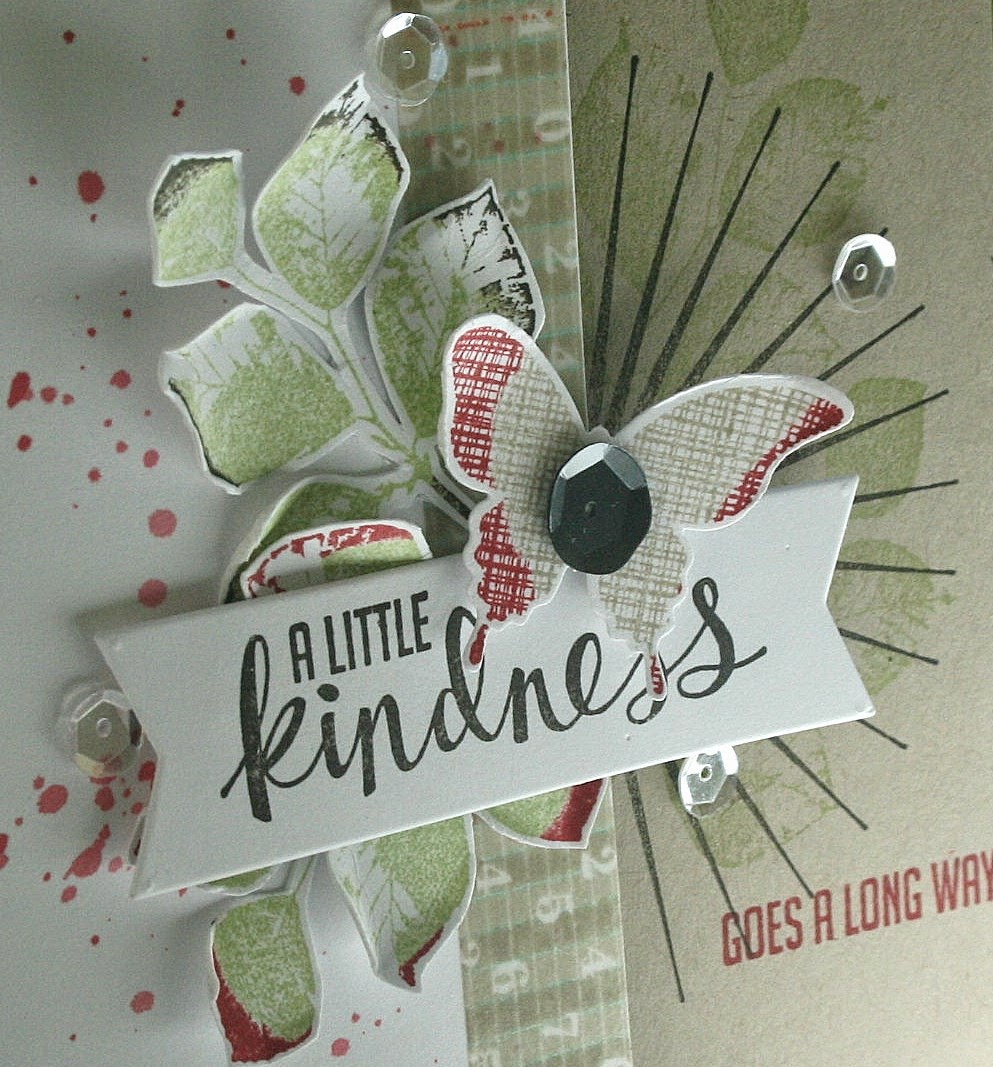 When the new Stampin Up! catalog came out I was immediately drawn to a set called Kinda Eclectic.  I finally was able to purchase it and picked it up from my SU! demo, Jenna, this morning.  When I got home with it I immediately set about creating my card.  I knew I wanted to layer some of the stamps so I started with the large sun image from the set and stamped it in Early Espresso.  The leafy image was layered on using Certain Celery.  I cut the white cardstock piece and then splattered it with some watered down Real Red ink.  A strip of kraft colored washi tape was added.  The leaf image was inked with the green ink then rolled in Early Espresso and trimmed out.  I repeated the process rolling the image in Real Red and trimmed out.  These pieces were adhered and the sentiment banner was adhered on top.  I split up the sentiment by masking it as needed.  The butterfly was inked with kraft ink and then rolled in Real Red, punched out and adhered as you see.  Finished things off with a large sequin on the body and clear sequins scattered around the card.  Added in a detail shot of the cluster of images. 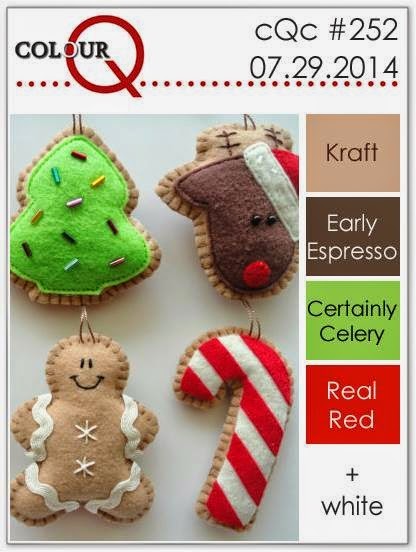 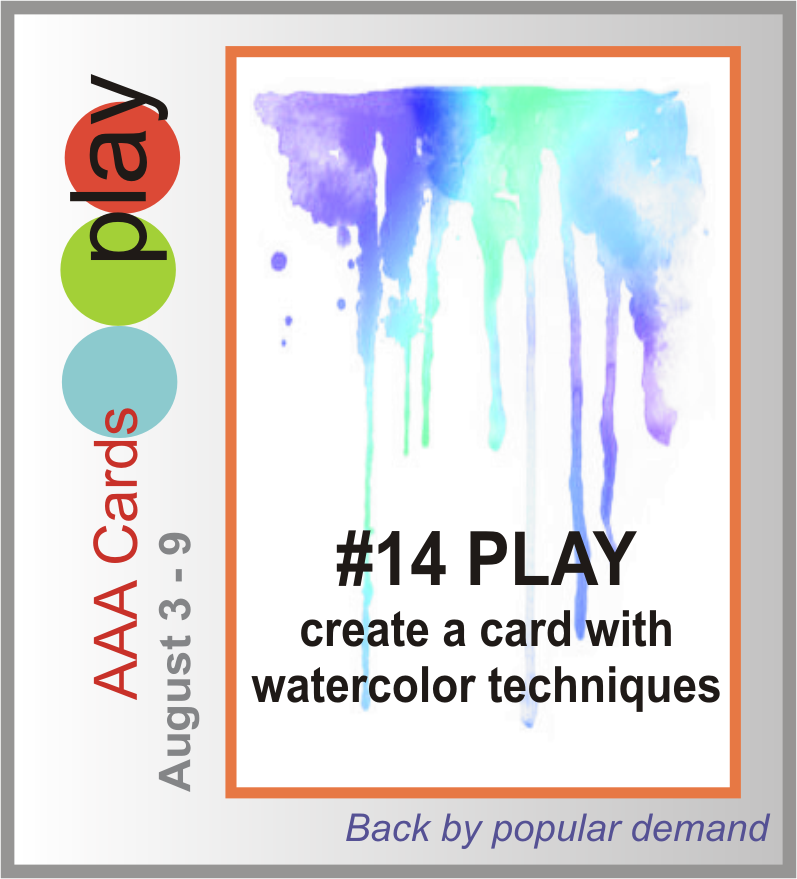 Thanks for stopping by...

This is so beautiful! I love your take on the sketch. Very eye catching!♥

Oh this is beautiful, Rosemary! Such a unique design!

Delicate, subtle and graphically beautiful, Rosemary! Thank you so much for playing again this week at AAA Cards! I love seeing your creations.

FABulous card Rosemary!! Love that fact that you just edged things in red then added the splatters too...pretty!

Wowzer, Rosemary! Your stamping is so professional & beautiful! This should be in a catalog!

Wow! This is such a stunning card, Rosie! I love every inch of it! So beautifully created!

Hello Rosie,
Well you have done it again... I could feel the excitement through your post on the eagerness to use the stamp set immediately once you picked it up, and goodness you have related this impatient desire wonderfully with this card; it is just stunning. Must be my favourite for the year I think.
Smiles:)
Sue

Ditto everyone else Rosemary - this a real stunner. I love it! Thanks for playing along at Colour Q!

Wonderfully crafted card, Rosemary! You always make the most gorgeous collage-type cards. And, this one fits the bill perfectly for all of the challenges you mentioned!

I was drawn to this set, too, and couldn't wait to get it at convention! You did a bang-up job with it and the sketch....this is just stunning! SO glad that you chose the CQC colors for your project this week! It's beautiful!

This is so pretty :) love the beautiful design !

Love this new Stampin Up stamp set, waiting for mine to arrive! Thanks for joining in with the challenge at AAA Cards.

This is beyond GORGEOUS!!!
Hugs, Penny

Hi Rosemary, This is a beautiful website- love your cards! This card is a wonder in itself. Fab! Thanks for sharing it at AAA Cards Play with Watercolors. Cheers, Victoria Lavender

Oh wow, this is just FAB! I love this stamp set and I shall pinning your gorgeous creation to my inspiration board! Love the collage of elements you've used - especially the strip of washi tape. Thanks for playing along with the ColourQ this week!

your card makes me want to run out and but this stamp soooo beautiful, totally love it :)

Hi Rosemary, love what you did with the colors and this stamp set! Thanks for joining us at the colourQ.

LOVE that amazing creation! So glad you were able to play along at AAA Cards

So lovely, Rosemary ... all that texture and depth is just gorgeous! Anita :)

I love how you layered all of your elements on this card...WOW! Love the Washi tape, and once again, your splatters are amazing, Rosemary! Very pretty card!