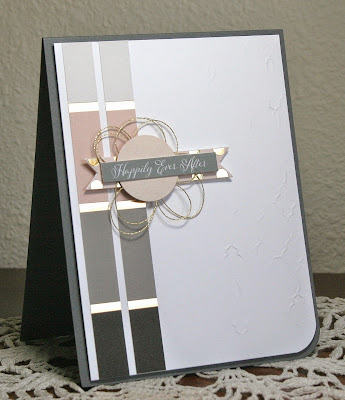 Hey friends!!   Popping in today with two cards for two different challenges... CASology where the cue word is wedding and Dies R Us where the challenge is to make an anniversary card.   Earlier this month I got the Simon Says Stamp May card kit which is perfect for wedding and anniversary cards.  I don't have any weddings to attend, but I just fell in love with the kit when I saw it so I had to have it.  I used it to create my two cards.  First up in my card for CASology.  There is absolutely no stamping on this card.  I used different bits and pieces from the kit to make the card.  In fact the two strips along the side of the card are from the piece of paper from the kit that I used to create the second card.  I used a banner and word strip from the kit, a circle punched from cardstock and some gold metallic twine to create my little sentiment embellishment.  The white cardstock partially embossed before I added the two paper strips along the one side.  One corner was rounded and the piece was then mounted on a dark grey cardstock base. 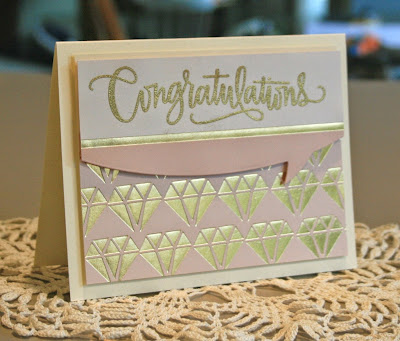 The second card is for the Dies R Us challenge.  They are celebrating their 1st anniversary and so the challenge is to create an anniversary card.  I think this card would be perfect for a golden anniversary card or any anniversary really.  I die cut the patterned paper using the Lawn Fawn Speech Bubble border die.  The "congratulations" from the Simon Says Stamp set "Congratulations" (it is part of the May card kit) was stamped using VersaMark watermark ink, gold embossing powder applies and then heat set.  The bottom paper is also from the SSS May kit.  Love all those fun gold foil embossed diamonds.  I adhered just a strip of that to a cream cardstock panel and then added the sentiment portion on top using fun foam instead of foam dimensionals to give the piece more stability.   The panel was then attached to a cream cardstock base.

Thanks for stopping by...

Fabulous job on both cards but of course I love the Anniversary card the best! Thanks so much for playing in our ‘ANNIVERSARY’ challenge at Dies R Us! Please come back again soon!

both your cards are so pretty - especially love the first one - i bought the kit too - first one i've ever bought from them - was disappointed in the packaging as my pp were bent from being loose in the box. but love the papers and the good stuff in it tho.

Both cards are beautiful!!

Rosie your card at CASology just jumped out of the gallery, and into my heart!! Gorgeous! So happy to stop in to see the second beauty as well! I loved that kit, too!
=] Michele

Two beautiful cards by using the SSS card kit. Great combination of the metalic gold with the pp.

Gorgeous cards! I bought the 6X6 paper pack of that beautiful paper- love it.

Love the glitz and glam on both os these pretty cards!!

Both of these are fabulous, Rosemary!!!! The colours of the first card is simply great and I love the CAS look!!
All the glitz and glamour on the second one make this really eye-catching!! The soft colours work perfectly with all the gold!!!
Lovely cards, Rosemary!!!
Have a great day!!!

Two wonderful cards Rosie but I the first card is my favourite, so stylish!
Val x

Two beauties, Rosemary ... one chic and elegant, the other glitzy and glamourous ... fabulous! Anita :)

Both such elegant cards, but I really love the way you have worked that gold twine behind the sentiment of the first card. So beautifully layered, but still CAS. Thanks so much for sharing with us at CASology this week!

Oh my goodness these are gorgeous Rosi.

Lovely and elegant!!! Always a pleasure to see your creativity at CASology!

Rosemary, both cards are simply beautiful. You've used the pretty paper so beautifully!

Both cards are gorgeous! I am so glad SSS spotted you, so I found your work. Love it!! 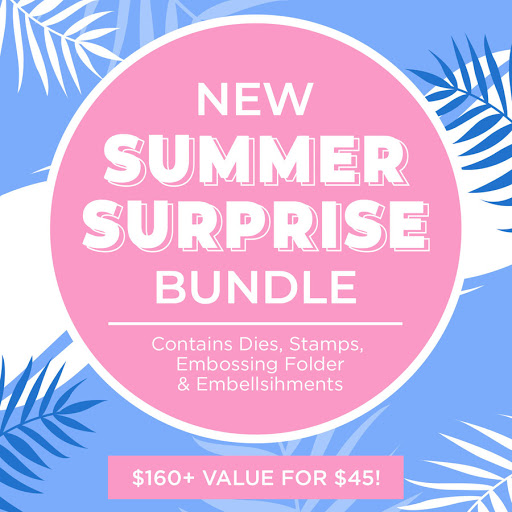