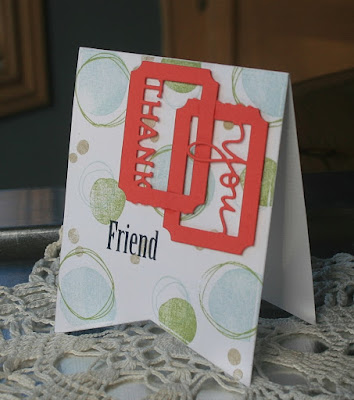 Hey friends... popping in with a couple of cards that I had the chance to make today.  Weather has been hot, hot, hot and for me that means stay inside as much as possible!   The first card was made for the current Simon Says Stamp Wednesday challenge "get in shape", as well as the current Colour Me...! challenge.   I have also posted this card in the SSS flickr group and entered it in the current SSS flickr group challenge:  die cuts.   Love the SSS Thank You Ticket die and wanted to use it in a different way so I die cut it from some SU! Watermelon Wonder cardstock, took it apart and then adhered it as you see.  The card was made using the largest die in the MFT jumbo fishtail flag stax set.  Stamped the card allover using some of the solid and line images from the Scribble Flowers set using Pear Pizzazz and Soft Sky inks.  Added in a few spots using kraft colored ink.  Adhered the tickets and then added the word "friend" from Artful Flowers in black ink. 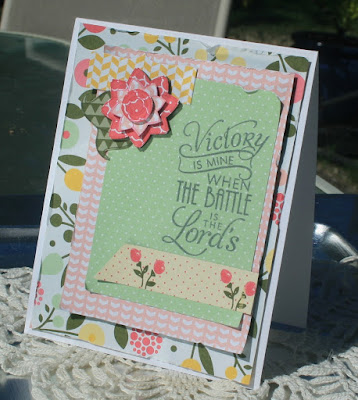 The second card was made using July Viva La Verve sketch #3.  I used lots of patterned paper for this one and did some paper piecing, as well.  The papers are from an SU! paper stack.  The stamps are from the Verve set  Wonderfully Made.   A tab die from the Verve Flag It die set was used as well.   As I started this card and began adding all the different patterns I was a bit worried as to how it would turn out, but after I was done I was really pleased... I think it looks perfect!  The flower from Wonderfully made was stamped on several papers, trimmed out, adhered together and added to the card front.   I used black ink to stamp the sentiment, but for whatever reason it didn't stamp super dark so it looks kinda like grey!

I love the way you created the background my mixing solid and line images. Thank you for joining us at Colour Me...!

Love your interpretation of the Verve sketch. The papers are gorgeous, and your flowers are so sweet!

Two totally differently styled cards, but both so beautiful, Rosemary!!! Love your creative way using the die cut tickets on the first one and all the lovely papers on the second!! Really great!!!
Have a fantastic week!!!

You must have been very comfy inside as these are 2 wonderful cards, Rosemary! I stared at that sketch & had no idea what to do, but your card is beautiful! Love the flower & all the pretty patterns! The first card is amazing--love using the flag as the card! The thank you tickets are neat taken apart & overlapped--brilliantly designed, my friend!

I made a similar background with these stamps this week! Great minds... Your cards turned out great, love the colors with this sketch.

Very beautiful cards, Rosemary! Those circles on the BG awesome with coral tags! Thank you for playing alone with us at Colour Me!

One modern and funky the other a little on the old fashioned cozy side!! Love the placement of the overlapping tickets!!

Two fabulous cards...but your thank you card is so fun and very clever! Thanks for joining us at Colour Me!

Rosemary such a fun card! I love those die cuts and cute swirls :) Thank you very much for playing along with us this week at Colour Me...! Be sure to come back on Wednesday and join in the fun for our next challenge :)

Lovely cards, fabulous fishtail one and love the pretty second one.
Thank you for joining us at Simon says Stamp Wednesday Challenge.
Luv
Debby

That graphic fish tail shape is fabulous with those yummy circles, Rosemary ... the pop of colour from the tickets is brilliant! Lovely layers and patterns on your second card ... so very pretty ... and such a wonderful sentiment! Anita :)

both of your cards are so pretty.. awesome designing..

These are both just beautiful! Love that cool tag shaped card and your VLV card is just dreamy. Thanks for playing!