a canvas to imagination... 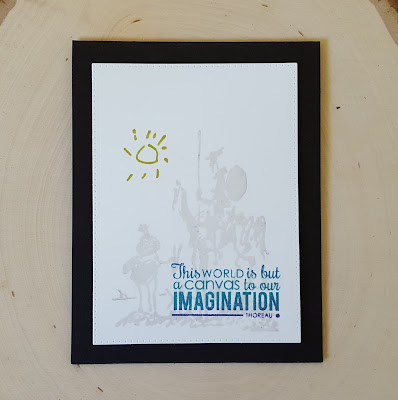 Hey friends!!!  Lisa and I had so much fun last week challenging each other to make a card for the CASology challenge that we decided to take up the challenge, again!  This week the cue word at CASology is "art".  When Lisa contacted me and asked if I wanted to do the challenge I emailed her back that I would give it a go, but thought I would have trouble.  I can't believe how wrong I was, lol!! Within minutes of sending off that email I had an idea for my card.  When my husband and I first started dating we would often go to different art shops.  While we were at one I spotted an art poster of Picasso's Don Quixote.  I'm not a huge fan of Picasso, but I absolutely fell in love with that particular Picasso so my hubby (then boyfriend) bought it for me!! Fast forward about 15 years and I found a stamp of Don Quixote and I just had to have it.  I used that stamp on my card.  I inked up the sun in some chartreuse ink and then the rest of the image in Simon Says Stamp Fog.  The sentiment is from the Reverse Confetti set Peacock Pretties and was inked up using Hero Arts Mermaid Ombre ink pad.  I die cut the image with a polka dot rectangle die and then mounted it on a black cardstock base.   What better way to use the cue word then to use a piece of art! 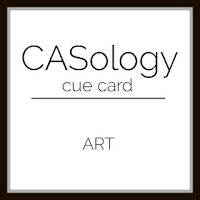 Thanks for stopping by... please make sure that you head over to Lisa's blog to see how she was inspired by the cue word!

Absolutely genius Rosi and I love the story you shared. Brilliant in your layering style. All the way down to your perfect sentiment.

Ha! I couldn't figure out the grey, but now I see it clearly! A great take on Art. Love what you and Lisa are doing with this challenge - I hope you'll continue! So great to see you at CASology this week, Rosemary!

Rosemary, every detail on this card is simply perfect & beautiful. I love the stamping & design. Fabulous take on the challenge.

What a fun story you've shared.

Oh, I love that cute sun, Rosemary - so clever and effective to do it in the chartreuse ink with the rest in soft grey!!!! And I love that wonderful sentiment to complete your little work of art perfectly!!! Wonderfully done, my friend!!!
Have a great day!!!
Hugz

A challenge within a challenge, how fun!! Great story behind this too Rosemary, TFS!! Cool card!

Oh you nailed it, Rosemary--so fun & love the story behind it!

Such a fun post, Rosemary! I always love to hear the stories behind the creation! Beautiful card!

That is such a cool Don Quixote image and the perfect, subtle background for the sentiment, Rosemary! I'm so glad you played along with us at CASology again this week!

Such a cool card, and wonderful quote and image. I love that you are playing your own little mini challenge based on CASology!! Thanks so much for playing along.

How fun that you and Lisa are hosting you own challenge within the CASology challenge! What a great idea. I think the image is fabulous and the quote perfect. Thank you for sharing with us at CASology this week!

That quote is so perfect with the Don Quixote image, Rosemary ... such a cool card! Hugs, Anita :)

Fabulous story and a fabulous card!