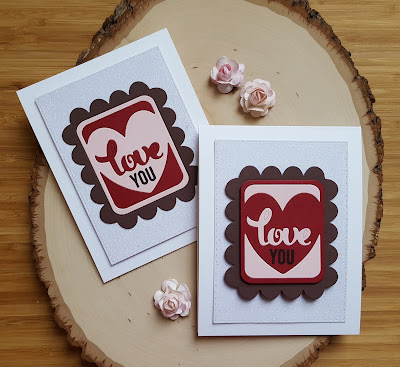 Hello!!  Stopping in this rainy day in the Pacific Northwest with some Valentines that I made over the last few days.  I generally don't make a ton of Valentines, but for some reason this year I'm really having a lot of fun making them!   First up are a set of cards that I made using the colors from the current Color Throwdown.   I will also be adding them to the current SSS Wednesday challenge of the color of love.  I decided to use a Reverse Confetti die that I bought last year around Valentine's day, but never got around to using.  I die cut one from pink cardstock and one from red cardstock and then swap the colors out as you see.  The sentiment is from the Reverse Confetti set Forever Fall.  The you is actually part of a sentiment that says thank you.  I simply masked off the thank, inked up the you with black ink, removed the mask and stamped.  Super simple.  Each panel was then matted with brown cardstock die cut with another Reverse Confetti die.  I die cut some white glitter paper using an AJVD die for the larger panels and then adhered everything to white cardstock bases. 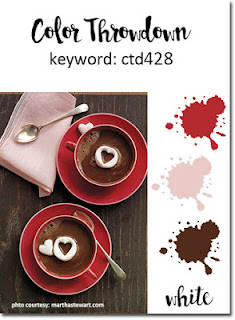 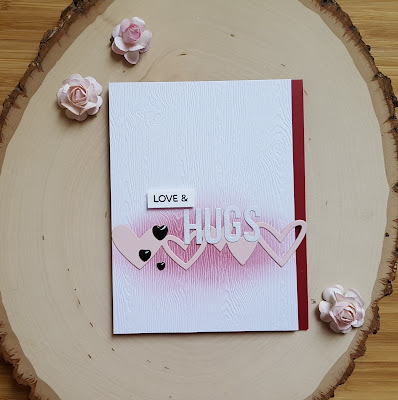 Next up is a card that I made for the current MFT sketch challenge. I started with a panel of woodgrain cardstock that was trimmed down on one side and then blended on some dark red ink.  The MFT heart border was die cut from light pink cardstock and adhered to the woodgrain panel.  The HUG (from the Word for Friends die set from the Fancy Flowers card kit) was die cut from white glitter cardstock and then adhered over the top of the heart border.  I stamped the Love & from the MFT stamp set Geometric Greenery in black ink, trimmed it out and then adhered to the card using foam dimensionals.  I finished the panel off with some black enamel hearts and then adhered the panel to a dark red cardstock base.  I'm going to add this to the current SSS Wednesday challenge, as well.  I'm going to add this one to the current Fusion challenge of interlocking hearts.  I went with the inspiration photo and hearts theme. 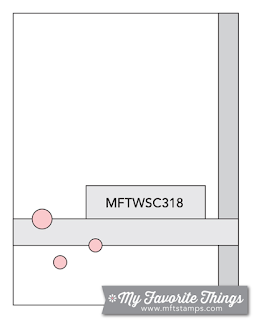 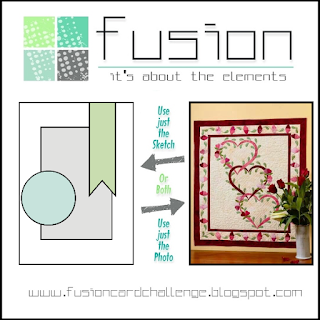 Wow--these are all terrific, Rosemary! Love the RC die & oh my goodness--the MFT card is one of my favorites! Love the woodgrain with the inking, the beautiful row of hearts & the red showing down the right side!

A trio of Valentine loveliness Rosemary!! Love them all but that RC die is pretty darn sweet!!

Love the way you used the colors on these pretty Valentines!

Love the bold, graphic look to your first card and your second card is so beautifully soft. Both gorgeous cards!

Three fabulous cards, Rosemary! Just love the brown/red combo on the first duo and the wonderful heart die with the inked woodgrain card behind!!

Beautiful Valentine's -- love the colors on the first, and that beautiful ink blending behind the die cuts is stunning!

You two Valentine's Day cards are just great, Rosemary!!! Such a clever idea to do the two using the die cut pieces like that!!!!! I love to stretch my stamps by masking off parts to stamp only certain parts of words!!!! Your Fusion card is beautiful!!!! Love the sponging and the little black hearts are so sweet!!!!! Such a lovely CAS look!!!!
Hugz

Fab cards Rosie and such different styles. The first 2 so contemporary and the last one very romantic! Love the woodgrain background and that lovely trailing heart die.
Val x

Thank you for joining us at Simon Says Stamp Wednesday Challenge this week.

A cute take on the colors; I love the big scallops! Thanks for sharing your card with us at the Simon Says Stamp Wednesday challenge!

Super sweet card, Rosemary. Thanks for playing along with us at the FUSION card challenge and hope to see you again.