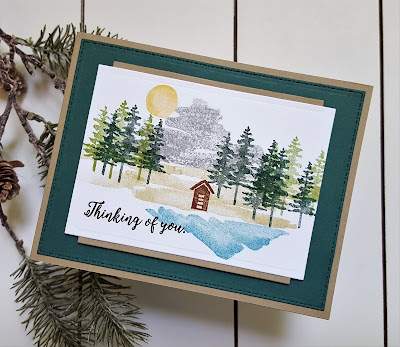 Hello!  Hope your week is going well.  I did some stamping today and used some very neglected Stampin Up! stamp sets.   I purchased the scene building set called Waterfront last year (yikes!) and never got around to using it (too much stuff!).  But when I saw the new challenge at the Paper Players to create a card with a summer vacation theme.  Does anything say "summer" more then a scene of a cabin on the water?    I did several test layouts before I got one that I liked.  I used the following Stampin Up! inks to create my scene:  River Rock, So Saffron, Marina Mist, Tranquil Tide and Smoky Shadow.  Once I had my scene done I die cut the piece with a AJVD basic rectangle die using my brand new Gemini Jr die cutting machine!  I bought it a month a go and finally got it out of the box the other day and fired it up.    It works like a dream and it is nice to not have to turn a handle to cut something.  I die cut some Crumb Cake cardstock to use for the piece to use to back the scene panel and then die cut some Tranquil Tide cardstock for the largest panel.   The sentiment is from the SU! Colorful Season stamp set and was stamped with VersaFine CLAIR.  Everything was then layered up on a Crumb Cake card base.   The layout is based on the sketch from Sunday Stamps so I will be posting it there and also at the Simon Says Stamp Wednesday challenge. 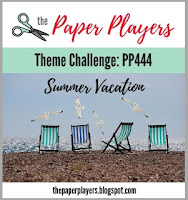 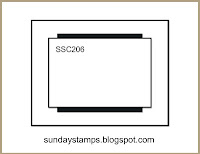 Thanks for stopping by... have a wonderful day!

Beautiful, Rosemary! I think this is one of my all-time fave sets - I love building a lovely mountain scene, as you have done! Just gorgeous! Thanks so much for playing at Sunday Stamps!

Our dream vacation scene which you've perfectly created, Rosemary! This is just wonderful & clearly a winner in my eyes!

Cute card and looks like somewhere I'd like to be right now! So glad to find you through the SSS challenge.

What a fabulous scene Rosemary, this is wonderful!

Such a perfect card for a summer vacation theme, Rosemary! I know I would love to vacation in a lakeside cabin! Thank you for sharing with The Paper Players this week!

This is such a great card using this great set! I know what you mean about too much stuff, LOL! Anyway, you created a perfect little vacation scene..very serene! We are so happy that you shared this with us at the Players this week!

I hear you Rosemary - I've had this set ages too and haven't used it anywhere nearly enough! It's so great for scene building - the setting for your waterside log cabin looks idyllic. Thanks for sharing with us over at The Paper Players this week!

Fantastic card, I love the scene you created!

Thanks for playing along with us at Sunday Stamps! 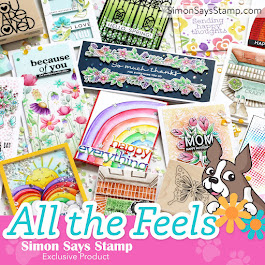 All the Feels Release 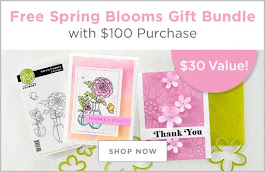