Hello friends!!  It is a wet and really cold day here in Western Washington... typical mid-December for us.  I don't mind the cold, but combined with the wet... not so fun!  Anywhoo... I have a card to share today that I made for this month's Sketch for You to Try challenge.   I was so sad when I read Jen's (the owner of SFYTT) post and saw that she has decided to shut down SFYTT.  When I first started posting cards online SFYTT was one of those challenge blogs that I always saw people talking about and posting their cards for.  I checked out the challenge a few times, but never seemed to be able to get something done in time to play along.  I was finally able to start playing along toward the end of 2011 and challenged myself to complete all the sketches for 2012.   Much to my surprise and delight I was even asked to be a guest designer for SFYTT in March of this year!!  So... yeah... I was definitely sad when I read Jen's post.  But with the posting of this card I will have met my goal of completing all the sketches for 2012... Yay!!  The complete list is at the end of this post. 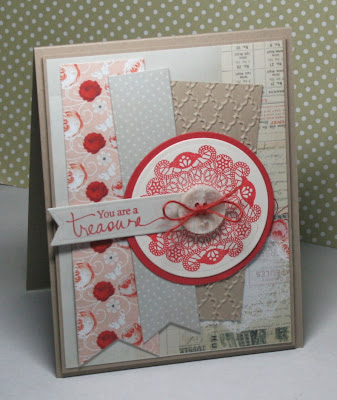 For my card I decided to use a recently acquire My Mind's Eye stamp set that coordinated with the newly released My Mind's Eye Lost & Found 3 collection, Ruby.    The sentiment is from a PTI mini set, Signature Series Dress Form.   SU!'s Ruby Red (an ink they no longer carry) is a really good match for one of the reds found in the patterned paper so I used that to stamp the doily image.  I cut it out with a Spellbinders plain circle die and then matted it with a plain circle of  Ruby Red cardstock.  The fishtail flags were cut with... yep... my totally over-worked Fishtail Flag Stax dies from My Favorite Things.  The kraft cardstock was embossed using a new SU! embossing folder, Fancy Fans.  While not part of the sketch I added the sentiment as shown because I liked how it looked!!   Finished it off with a kraft colored button and some twine that matched.  So there you have it... my final SFYTT card.  Now here is a list of all my SFYTT cards for the year:   January, February, March, April, May, June, July, August, September, October and November.

Thanks for stopping by and thanks to Jen for hosting such a fabulous sketch challenge that so many paper crafters have enjoyed!!!

Labels: My Favorite Things, My Minds Eye, Sketch for You to Try, Spellbinders

It's always sad to see a challenge blog go but you went out with a bang! I ADORE that embossing folder Rosemary! Another lovely creation. Stay indoors and keep warm!

This is a fabulous interpretation of the sketch, love the Kraft and red combo.

Had a catch up, all good things as usual.

This card is gorgeous!!! I am sorry to hear about one of your favorite challenges. I took a peek and their sketches are fabulous! Now I am sad that I missed out on their blog all of this time. On a happier note, I do congratulate you on accomplishing your goal. That is awesome!

Rosemary, what a lovely interpretation of the sketch! I love the colors and the pretty papers.

I'll take some of that rain. One good thing, though, we get to see more of your beautiful creations, if you have to stay indoors.

absolutley gorgeous as always!!!! Love the sketch and the side border!

Very pretty. Love the layers, something i struggle with. x

Beautiful card, Rosemary! You rocked the sketch, as always!