Hello!  Hope your week is going well.  We had some really nice weather the other day, but as is the case in the Pacific Northwest this was fleeting and our typical late winter/early spring weather returned... rain!  Oh well.  I have a couple of cards to share today.  First up is a card for this week's Color Throwdown and Freshly Made Sketches.   My card started out one way, but ended up as you see it now.    Originally I used my Glimmer to create the three panels that appear in the FMS layout, but they didn't foil completely and were a little off so I decided to scrap that idea.  I was going to use an old Simon Says Stamp set that contains images of daffodils with that card so I continued on with that part of the card idea, but switched the panels to crosses from another old Simon Says Stamp Easter set.   I stamped the daffodils in Memento Tuxedo Black ink and then colored them very simply with Copic markers.  I added some depth with Polychromos pencils.   I ink blended a panel with distress oxide ink in Squeezed Lemonade and Lucky Clover.  Funny aside... I could have sworn I had Mowed Lawn distress oxide ink, but I do not!   I die cut the crosses, adhered them to the panel and then added the daffodils.  I die cut the word Easter (it is part of the same set that the cross came from) from vellum four times and adhered them together.  I was going to leave it that way, but didn't like it so I added the glittered die cut to the top.  I still wasn't happy with the card so I decided to stamp some leaves, color them with a green Copic marker and then add them to the daffodils.  Still not sure about it... let me know what you think. 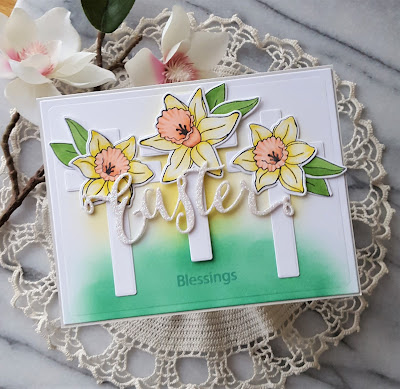 The second card is for the Simon Says Stamp Wednesday challenge to use florals.  I guess my first card works for that, as well.  I created this card using more products from my Spellbinders Whimsical Forest card kit.  One of the dies from the kit is the fun frame that you see.  I die cut it from gold cardstock, as well as additional cardstock and adhered them together.   I die cut some white cardstock, as well as patterned paper from the kit with the Spellbinders essentials rectangle dies.  I embossed the white layer and then layered them on a card base from the kit.  I then adhered the frame and all of the floral pieces that came from one of the ephemera packs from the kit.   The hello was created by die cutting the shadow image from white cardstock and then stamping the corresponding word hello in dark blue ink.  The sentiment was then adhered to the front of the card as you see. 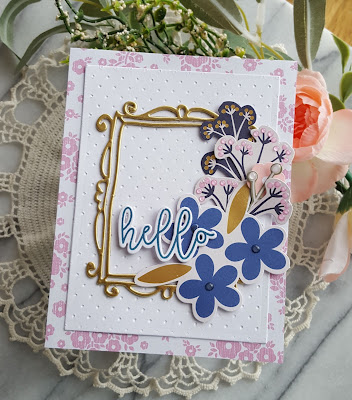 LOVE your daffodil card (of course) a beautiful idea and so Spring like. Love the frame and flowers on your second, so pretty in blue and pink.
Faith x

Too very pretty cards, Rosemary! I love those daffodils to bits!

Lovely daffodils, Rosemary ... the detail you added with the coloured pencils really brings them to life! Such a pretty and delicately vibrant floral cluster on your second card ... fabulous with the dainty frame! Hugs, Anita :)

Wonderful card, each with its own beauty and colors. I personally like the 3 crosses idea with the flowers on top -- but then again, EASTER!

Your daffodils are gorgeous (we are always our own worst critic)! Always love seeing your entries in the throwdown gallery!

Love the touch of glitter on the Easter card! Thanks for playing along with us at FMS this week!

Don't be critical of yourself. You are amazing and so are your creations! Thanks for playing along with us at Color Throwdown this week.

2 beautiful cards, Rosemary! Love the daffodils on the crosses & great how you can make very different cards with that kit! Love the gold frame & design of the 2nd card!

Gorgeous cards! Your daffodils look lovely! Thanks so much for joining us at Freshly Made Sketches.