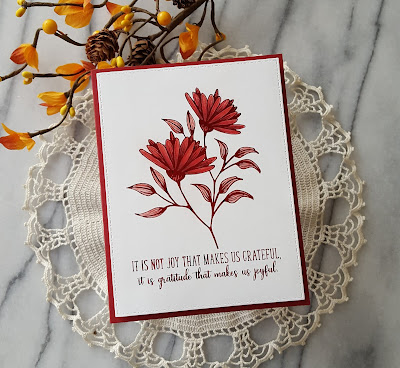 And I didn't use my Glimmer foil system!  I think about 2 years ago I purchased a Simon Says Stamp monthly card kit that included some Gina K. Designs Foil Mates sheets.  They were fall inspired and exclusive to the Simon Says Stamp card kit so there is not information about them.  At the time I did not have anyway of foiling the images (that I didn't know about) so I set them and the foil sheets I received aside for a later date.  Finally about a year ago I decided that I needed to figure out how to foil the sheets and make something with them.  So I got on the internet and started searching and found a couple of blog posts (don't remember the blogs... sorry!) and learned that it is possible to use an iron to do the foiling.  I gave it a try and it worked!   It wasn't easy to foil using the iron, but the end result was actually pretty darn good.  Once I was done I die cut each of them with a rectangle die and then promptly set them aside!   Recently I was going through my little box of scrap pieces and found them, again.  This time I was determined to turn them into cards and I did with two of the pieces.  Before turning them into cards I decided to color the images as I had seen someone else coloring foiled images.  I think that person (I'm not sure who it was) used Copic markers, but I decided to use color pencils to be on the safe side.   The first card is this pretty daisy like image and sentiment that I foiled using a deep red foil that was in the card kit.  I used two shades of red Polychromos pencils to color the flowers and then added a little bit of shadow with a dark brown.  The leaves were colored with just one shade of red.  I adhered the panel to a dark red cardstock base.  I'm going to add this one to the September Gina K. monthly mix challenge.   Here is a close up of the foiling. 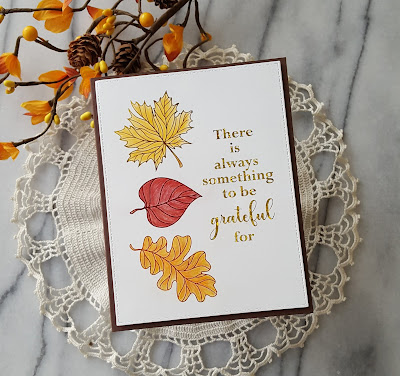 With the second card I was able to use three different colors of foil to foil the falling leaves and then an foil with a fun pattern to foil the sentiment.  I colored the leaves using the some of the colors from the current Color Throwdown.  To bring in the brown from the combo I mounted the panel on a dark brown card base.   The top and bottom leaves were colored with several different Polychromos colored pencils to create the color blends.   I did this so that one leaf was more yellow in color and the other was more orange in color, but still a blend of the two colors.  I think they turned out pretty well.  The middle leaf was obviously colored red (same colors of pencils that I used on the daisy image.  I'm also including a close up of the foiling.   While it was fun learning that you can foil with an iron I'm glad that I now have a laminator that I can use to foil should I get additional Gina K. foil mates sheets.   May enter this one in the monthly mix challenge, too. 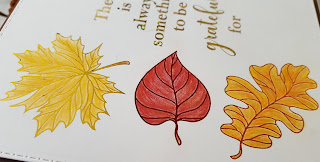 I hope my cards inspire you to try an unconventional approach to your crafting!  Thanks for stopping by and have a lovely day!
Posted by Rosemary at 5:01 PM

Two foiled beauties, Rosemary! I know Lin has enjoyed using the laminator on Gina K foil sheets but it's good to know the iron works too!!

Very pretty foiling. I have not had luck with a laminator nor the HS minc... yours definitely worked tho! Nice addition to add more color too

That first card is just gorgeous, Rosemary! Love the image & how you added the pencil coloring! The leaves are beautiful, too--another great card!

The soft colouring is lovely with the rich foil on both these autumnal cards, Rosemary ... fabulous ironing!! Hugs, Anita :)

More awesomeness here again Rosie....so sorry I am late leaving comments too, my time isn't my own lately ;) Viv xx

Your cards are beautiful! I love the layouts and the colors you used. Thanks for joining Gina K. Monthly Mix Challenge.