you melt my heart...

Hello!  Hope you are having a great week.   It is trying to snow here in my corner of the world.   Fingers crossed that we won't get alot of it.   Since it is pretty darn cold outside so that is a good reason to stay inside and make cards!   I have managed to make four cards!  I will be sharing three of them toward the end of the month.   The card I'm sharing now is for Color Throwdown and Freshly Made Sketches.  I just can't help it... I love combining those two challenges, lol!   There is absolutely no stamping on this card.  Everything was done with my Glimmer hot foil system from Spellbinders and hot foil plates from the Spellbinders January and February Glimmer kits.    I foiled the heart and sentiment using black foil.  Both were then die cut with the matching heart die and a sentiment strip die.  Those dies are from the January Glimmer kit.   To add a little bit more interest to the card I used the largest die from the February kit along with the foil that came with the kit to Glimmer the border around the perimeter.   I love how the foiling around the edge of the rectangle looks sort of pink even though it isn't!  The rectangle was die cut with the largest Spellbinders Essentials die.  A strip of pink cardstock was die cut with the same die I used to die cut the sentiment.  I then layered up everything up on the panel and then added a few little pink sequins. (Affiliate links used where possible at no cost to you.) 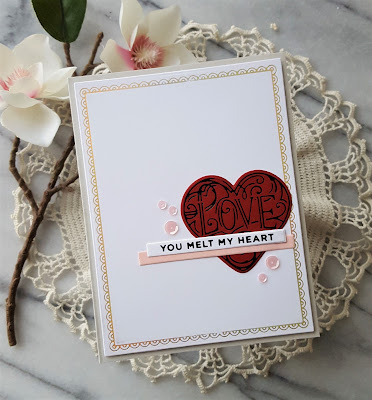 Wonderful design and execution! Thank you for joining us this week at the Color Throwdown!

Great use of the sketch and colors! Love the foiling....you just might be enabling a purchase on my end😀 so happy you joined us at CTD!

WOW! what a very beautiful card, love the border and the stamped heart.
Faith x

Very nice, the foiling inside the heart is a pretty, pleasant treat!

And you always combine those two challenges so well! This is lovely, Rosemary! I hope you didn't get too much of the white stuff ;)

Beautifully CAS, Rosemary ... and wonderfully elegant with the foil ... this is gorgeous! Hugs, Anita :)

Had to do a double take on that delicate foiling - amazing, Rosemary!!

I love that gorgeous border around the card base! Such a pretty card and a great job of combining the two challenges! Thanks for joining us at Freshly Made Sketches this week! 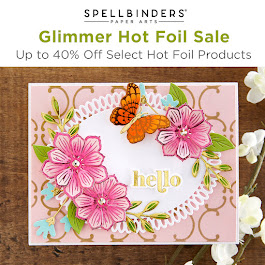