Hey everyone!  I here to share three cards that I created with a die from the new release from Simon Says Stamp called Make Magic.  Simon was kind enough to send me a fun die called Sunburst.   You can check out the new release right here.  First up is a card that I made using the die as it was intended.  I die cut bright yellow cardstock with the die with the idea to adhere it directly to my white cardstock base.  I have a very old Simon Says Stamp sunshine word die that I cut from black cardstock three times and adhered together.  I found the tiny hello in the Simon Says Stamp Friendly Flowers stamp set and stamped that on the die cut using VersaFine CLAIR Nocturne ink.  I then adhered the word.  The die cut was then popped up on the white cardstock panel with foam tape.  Super simple.  (Affiliate links used in the body of this post where possible.  Using the links earns me a small commission at no cost to you.  Thank you for your support!)  I'm going to add this to the current Simon Says Stamp Wednesday challenge as I used the old Sunshine word die and the brand new Sunburst die on my card. 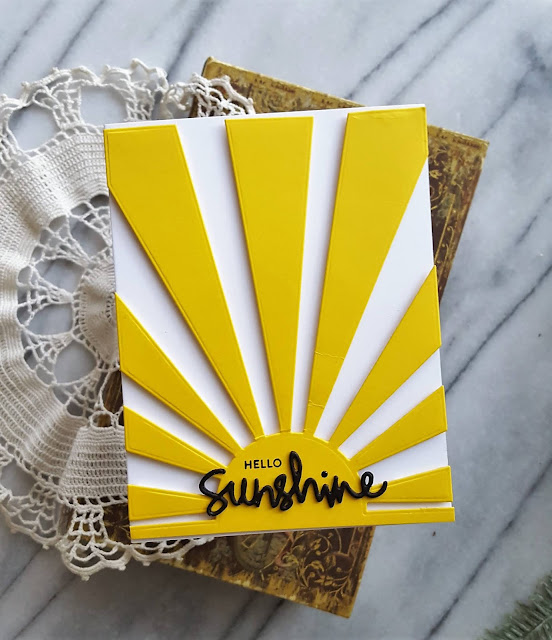 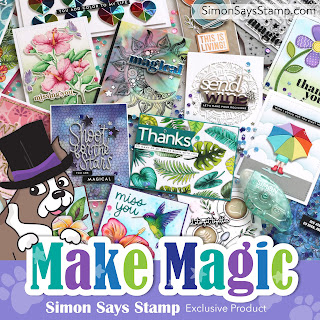 For the next two cards I used the die to make stencils.  Originally I was only going to use negative portion of the die cut as a stencil.  But then thought it would be fun to use the positive die cut as a stencil as well.  For the card using the negative part of the die cut I used distress oxide inks in Squeezed Lemonade and Wild Honey.  I blended on the Squeezed Lemonade and then used the Wild Honey only at the bottom for the sun.    Once my blending was done I die cut the panel with a rectangle die, added the sentiment (from the SSS Hello Darling stamp set) and some light yellow sequins. 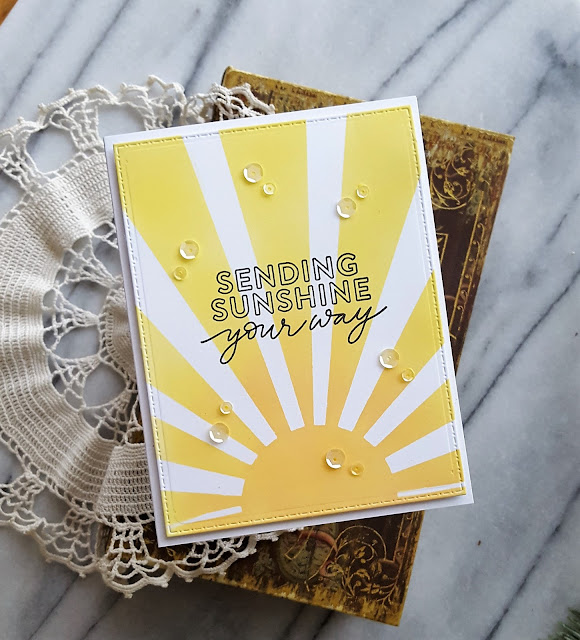 For the second card I used Dried Marigold and Wild Honey distress oxide inks.  After blending the two colors on my cardstock panel I die cut it down with a Spellbinders Essentials rectangle die and popped it up on a panel of black cardstock die cut with a large rectangle die.  The sentiment came from the Simon Says Stamp Smile Circle die that I have never used.  It is a circle die that has smile in the center.  I simply die cut several of the circles, trimmed out the smile and stacked them.  I then adhered that on the card along with some clear jewels from Pretty Pink Posh. 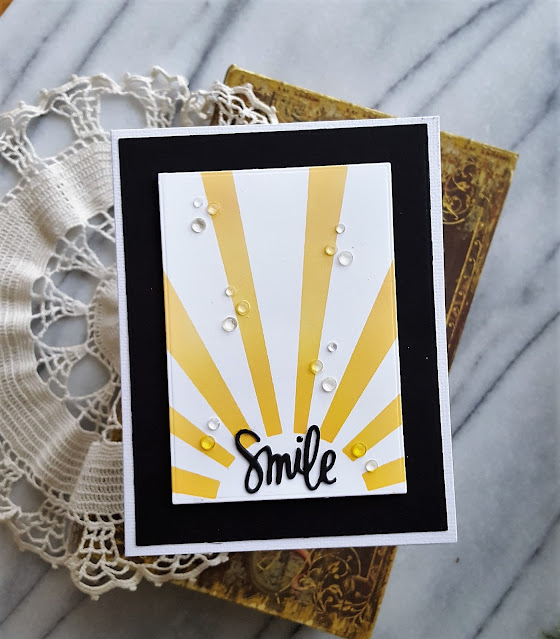 I had fun creating these three cards and pushing myself to use the die in a different way.  I hope you enjoy my projects!  Thanks for stopping by and have a lovely day!

Love the variety you've given us, these are amazing! The last one is my favorite, I love the drama the black mat adds!

Didn't pay much attention to the SSS release email but now I'll have to take another look! Just love your sunshine trio, Rosemary - soooooo creative!!

LOVE LOVE LOVE your Sunny happy cards Rosemary, btw, I could get into your Simon Says links?
Have a great week.
Faith x