Hello friends... another Tuesday is here and with comes a brand new CASology challenge.   I think we can all safely say that last week's cue word was rather well... challenging!  Hopefully this week's cue word will not be quite so challenging for everyone.  So... without further ado this week's cue word is "song".  And this week we also have a fabulous sponsor The Alley Way Stamps!!  If you haven't seen their super fun and fabulous stamps then you really need to check them out like right now.  TAWS was so kind and provided the CASology design team with super fun sets to play with and I received the cute Tropic Topic set.  And when I spied the cute little monkey in the set I got the idea to base my card on the "Banana Boat Song" also known as "Day-o".  All the deets for this week's challenge can be found here. 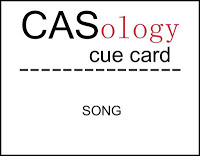 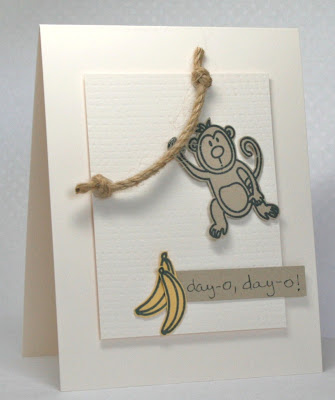 The little monkey was stamped on kraft cardstock using black ink and trimmed out.  I thought about coloring him a bit but decided to just leave him as is for this card.  A couple of bananas were stamped on yellow cardstock and trimmed out.  The cream cardstock piece was run through my Big Shot with a piece of burlap (hessian as it is called in Europe) on top to create the texture.  I got this idea from the amazingly talented Jenny of Crafting in the Country... the girl is an absolutely brilliant papercrafter so check out her blog!!  I knotted the ends of a small piece of cording and adhered to the card and then attached the little monkey.  A piece of kraft cardstock was run through the big shot using the burlap as well, a piece trimmed out and I handwrote the sentiment on it.  It was attached along with the bananas.  I think I should have put a banana in the monkey's hand, but too late now!!

Thanks for stopping by.... I really cannot wait to see what song related ideas all you super talented papercrafters come up with for this challenge!! In the meantime make sure you check out the cards from the rest of the design team: Melissa, Tracey, Jen, Ardyth, Judy, Maureen, and Meghan
Posted by Rosemary at 6:00 AM

I love your monkeys and song reference. Totally makes me smile :)

that my friend is Priceless!!!! Love it

Oh my but that monkey is adorable and the vine that you created for him to swing is is perfect!

Great song choice for that image, and of course your twine-vine is the perfect addition of texture!

Hi Rosemary, This is totally fab, great use of the song and superb execution, as usual LOL You have the ability to do many styles C&S is just one of your many talents, hugs Gay x

Hi Rosemary,
Firstly, I want to "Thank You" so much for selecting my card for HM at CASology...I am very grateful and humbled that you liked it!

Your card is absolutely adorable! I love how the bananas add a pop of color, and how you added jute to create texture...brilliant!

Of course, now I can't get that song out of my head :-)
Thanks for making me smile!

What great fun Rosemary, the rope is such a fab addition. Xx

"Daylight come and me wanna go home!" LOVE this fun card, Rosemary! And such a talented lady (Jenny) to be inspired by! I love the knotted rope, what a happy card!

Oh this is cute and CAStastic Rosemary, the knotted twine is brilliant for the monkey to swing on and oh yes I remember that song :0)
Jenny x

Ooops forgot to say thanks for the shout out :0)

LOVE it! Super creative & cute, Rosemary! Thanks for the tip about "embossing" with burlap--gonna try that!

Rosemary, girl, this is what they call stinkin' cute all over the card! If you have a top ten list of favorites of cards you've made, this needs to go on it!! BooYa!

I have enjoyed a wonderful scroll stroll down your posts I've missed and thoroughly enjoyed all your CASlicious creations!!

Super fun card, Rosemary, brilliant colour choice and I love the hessian/burlap texturing ... and oh that song ... I recall the Muppets doing a version with a big hairy creature doing the lead ... now it's in my head for the week!! Anita :)

Uh oh...that song is starting to repeat itself inside my head now! LOL! :)

Love this vine swinging primate! The embossed BG panel is perfect too!!

Rosemary I love your monkey and what a great song choice! The jute is a fabulous accent.

Love the monkey swinging on the rope ~ a super fun card ~ even if I can't get the song out of my head ;)!!

Daylight come and me wanna go hoooome.... I say day--O.. I think of Beetleguise and giggle! Love this cute little card. One of my very first stamps was a little monkey...Still have it.
Hope your weekend is sunny. Snowed here in Kirkland yesterday..

Brilliant! Love that song and your card is perfect for it. The cording rocks and I like the monkey uncolored. Have a feeling I'll be singing this for a while...

soooo adorable....got me singing that song!!! 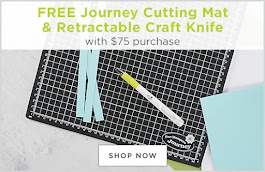