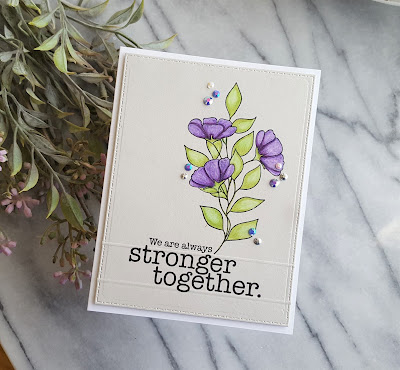 Hey there!  I'm popping in to share a couple of featuring flowers.  First up is a card that I made this afternoon using the beautiful Simon Says Stamp Stronger Together stamp set from the SSS March card kit.  When I sat down to start this card I saw a piece of Simon Says Stamp fog cardstock and decided to use that to do some coloring with my Polychromos pencils.  I stamped the image from the set using VersaFine CLAIR Nocturne ink and then picked out a nice purply-blue to color the flowers and two shades of green for the leaves. I laid down a layer of white before adding the colors and then blended out the purply-blue with additional white to tone down the color.  I did the same thing with the leaves.  Once I was done with the coloring I positioned sentiment and stamped it with the Nocturne ink, as well.  The layout for my card is based on the CTS layout and so I added some scoring to frame out the stronger together portion of the sentiment.   The piece was then die cut with an AJVD stitched dot rectangle and adhered to a white cardstock base with foam tape.  Finished with various different jewels in blue, silver and white.  Also going to add this to the current Simon Says Stamp Wednesday challenge because what is more feminine then flowers? 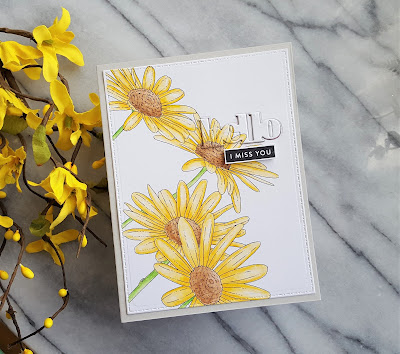 This next card was made using one of the floral prints from Suzy Plantamura that were included in the SSS March kit.  This one I colored with Faber-Castell watercolor pencils.  I had tried watercoloring with pencils several years ago and was never really happy with how things turned out.  Thankfully I have learned alot since then and I gave my watercolor pencils another try.   To color the daisies I used a combination of a bright yellow and a yellow that bordered on orange.  I colored on the two colors at the base of the petal and then blended out with water making sure to leave the center of each petal with a highlight area.  I colored the center of the flowers with two shades of brown and the stems with one shade of green.  Once I was done I die cut the piece with an AJVD stitched dot rectangle die and then I used the little hello die from the kit to die cut it out of the panel.  I placed some washi tape on the back and then filled in the opening with two additional hellos that I cut from scrap cardstock.  I finished off with the original die cut.  I then stamped one of the small label sentiments on white cardstock with VersaFine CLAIR Nocturne, trimmed it out and them popped it up with foam tape.  This one will also be going to the SSS flickr challenge to use dies.

Thanks for stopping by and have a great day!
Posted by Rosemary at 5:57 PM

Love both of these, Rosemary--beautiful coloring!

These are so feminine and just lovely, Rosemary ... your colouring is stunning on both of them ... they're so fresh and spring-like! Hugs, Anita :)

Two lovely floral cards! I like the wee bit of flower petals stamped onto the hello!

Beautiful florals, just what I expect to see when I visit your blog, and you did NOT disappoint!

Congratulations on your win this week at CTS, Rosemary! Truly well-deserved!
=]

Congrats, Friend, on the win! It's a beauty for sure